Ready for this week’s social media updates in our Spark Social Report by Spark Growth? Instagram has updated its Settings to allow users to opt-in or out of personalized ad targeting, and the platform also released a fun BTS-themed chat layout. Scroll to read more!

Instagram users are now able to choose if they want to be targeted with more personalized ads. If the toggle switch for “Use Data From Partners” is enabled, this will allow for the usage of supplementary data from third-party platforms and providers. Users can access this feature by going to Settings > Data From Partners, and can choose to either enable or opt-out of being targeted for personalized ads. With the COVID-19 pandemic changing the way consumers are shopping, the option for more personalized ads helps marketers refine the customer buying experience. 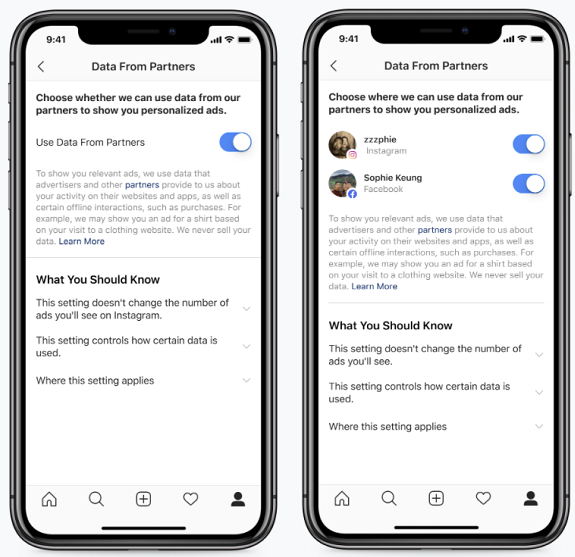 Users in certain countries may also notice something different about their Search bar. That’s because Instagram has added a keyword search option to it, which teaches users how to use the option by suggesting example keywords. The Search bar previously limited searches to hashtags and user accounts, so this new option aims to effectively allow users to find content relevant to their interests. Instagram has stated that this update is available in English to all users in Canada, the U.S., U.K, Australia, New Zealand, and Ireland.

As well, “Guides” are now officially available for all users. The feature was first released in May, wherein the platform worked with experts to create health and wellness guides ranging from self-care tips to how to manage anxiety during COVID-19. The recent expansion now allows all users to easily access this feature and create their own Guide. For businesses on the platform, Instagram states that Product Guides may also be featured in Instagram Shop.

Instagram has announced that a few new messaging features are officially available on Instagram and Facebook. First, the “Watch Together” feature (which was first announced in September) can now be accessed by users on both platforms. Second, new chat themes are rolling out to give users a wider array of customizable options. One particular theme features TinyTAN characters, which are animated characters based on the members of the popular boy band, BTS. Users who use this chat theme can share songs from the new BTS album and customize their message reactions. Users can access this feature by going to their chat Settings > Theme > TinyTAN.

Lastly, an easily accessible “vanish mode” feature is rolling out for all users. Instagram has noted what its motivations are behind the feature: “Sometimes a message is spontaneous – something you want to share in the moment without worrying about it sticking around. Now you can send memes, GIFs or reactions to share what you really think but can’t always say, without it staying in your chat history.” Users can access this feature by swiping up at the bottom of an existing chat thread and revert to regular mode by swiping up again.

Some fun news for Post Malone fans: Facebook launched a new video series hosted by the popular singer, which is airing exclusively on Facebook and Instagram’s “Watch Together.” Entitled Post Malone’s Celebrity World Pong League, the series will consist of 10 episodes and will be airing on Wednesdays and Fridays. The first episode aired on November 18th. Facebook explains the series’ premise: “Post Malone [goes] head-to-head against his celebrity friends including Doja Cat, Machine Gun Kelly, Quavo, and Saweetie in a battle to become the World Pong Champion.” To watch the show, users can either start a video call in Messenger or Instagram, or start a Messenger Room. Then, they can select the “TV & Movies” and choose Post Malone’s show from the list of content. 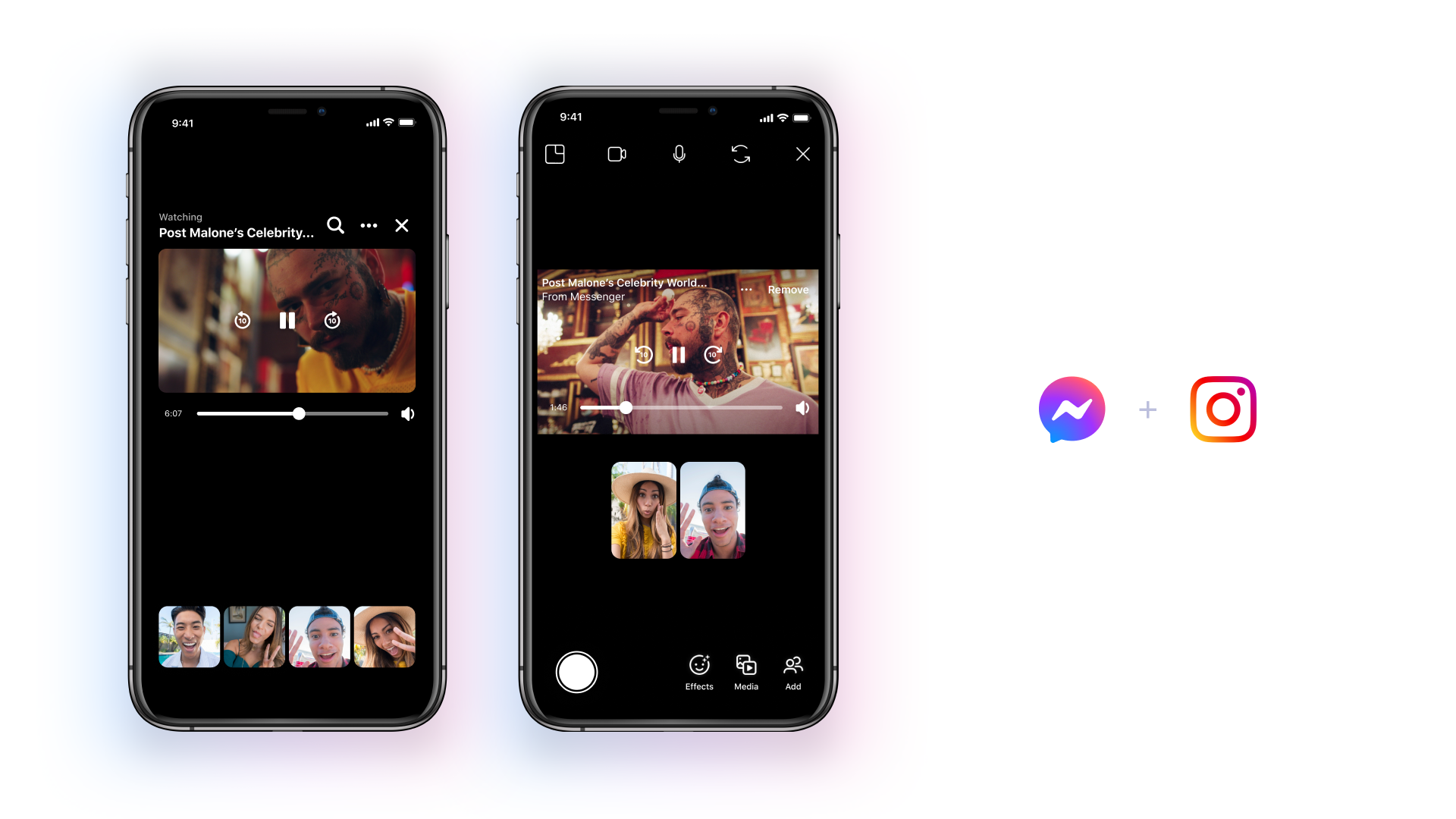 Facebook has also updated its “Rights Manager” tool to expand monetization opportunities for businesses. This feature was primarily created for publishers and creators who have a large catalog of content that users like to share. With this update, more creators can collect ad earnings from other users’ videos that use their original content (i.e. content that includes the creator’s copyrighted content). Facebook has also added a new filter view which helps to spot matches which can be monetized, offer further guidance on how to gain monetization opportunities, and the ability to collect ad earnings when placing an ownership link on the matched video. As well, in Creator Studio, there are new toggles for in-stream ads which allows for easy management on mobile devices.

Twitter has announced the official rollout of Fleets to all users, the platform’s own version of Stories. Fleets go live for a maximum of 24 hours, wherein users can write text, share Tweets, record videos, or post photos. Users will also be able to see insights such as who has viewed the Fleet, which again is similar to Stories on other platforms like Instagram, Snapchat, and Facebook.

That thing you didn’t Tweet but wanted to but didn’t but got so close but then were like nah.

We have a place for that now—Fleets!

Rolling out to everyone starting today. pic.twitter.com/auQAHXZMfH

However, just as quickly as the platform announced the global rollout of Fleets, yesterday Twitter announced that due to user complaints of performance issues (such as lagging), it will actually be slowing down the rollout in order to address and fix these problems.

We’re slowing down the rollout of Fleets to fix some performance and stability problems. If you don’t have the feature yet, you may not get it for a few more days.

We love that so many people are using Fleets and want to ensure we’re providing the best experience for everyone.

The platform is also testing the option for audio-only virtual meeting rooms, which are aimed to be built atop Fleets. These meetups would be marked with a purple icon on creators’ Fleets bubble, which will indicate that an audio discussion is taking place. Audio-only rooms will allow the creator’s connections to join, wherein they can decide to listen in or actively participate. TechCrunch notes that this feature mimics that of the invite-only private platform Clubhouse, but also observes that Twitter will need to be careful if they do release this feature. Clubhouse faced some controversy due to its lack of moderation around audio-only conversations.

In some potentially not-so-good-news for advertisers on LinkedIn, the platform recently admitted to an ad metric error that affected over 418,000 advertisers over a two-plus year period.

LinkedIn recently issued a statement admitting that in August, its engineering team discovered and fixed two measurement issues in their ad products. These issues stem from overreporting Sponsored Content campaign metrics for impression and video views, resulting in LinkedIn overcharging these advertisers. As noted by social media consultant Matt Navarra in the Tweet below, overcharging occurred by counting when iOS LinkedIn users rotated their phones to watch videos as additional views.

However, marketers who were affected can rest assured that they will be compensated for this error. LinkedIn stated, “More than 90% of customers saw an impact of less than US $25, and we are currently working with all customers who were impacted to provide full credit to their accounts.”

LinkedIn has been over-charging a lot of advertisers for video view campaigns and impressions.

Overcharging occurred on iOS devices when LinkedIn users rotated their phones to watch videos, it counted them as additional views.

The popular app is working to improve parental controls to better protect its young users. After releasing “Family Pairing” earlier this year, TikTok has added some updates to this feature. First, a new option to Search allows parents to decide whether their child can search for content, users, hashtags, and sounds. Second, a Comment option enables parents to decide who can comment on their kid’s videos (options include Everyone, Friends, and No One). Third, a Discoverability option lets parents decide whether their child’s account will be private or public. Lastly, for Liked Videos—an option that enables other users to see which videos a user has liked—parents can decide whether or not others can see the list of videos their child has liked. If you’d like to learn more about TikTok’s efforts to protect youth and fight against child exploitation, read more here.

In light of the upcoming holiday season, which will be inherently different from the usual festivities due to the COVID-19 pandemic, TikTok is launching a month-long holiday celebration called #HolidaysOurWay. This campaign, which was made alongside creator Nabela Noor, will aim to support, highlight, and celebrate the platform’s diverse users and creators. #HolidaysOurWay promotes inclusivity by encouraging users to share their cultural and personal holiday traditions.

As well, a weekly TikTok Live stream will feature creators who share their own holiday traditions and experiences. The stream was kicked off on November 17th with a Diwali-themed Live session. Another Live series called “Dinner With Me: Celebrating Holidays Our Way” will feature creators who share food-centric holiday content. TikTok will also be launching holiday-themed creative effects, as well as content for its “Amplify Diverse Voices” video series, which celebrates and uplifts different cultures.

WhatsApp released a useful infographic for marketers called “A Small Business Guide to WhatsApp Business.” The title refers to WhatsApp Business, a platform tool that enables brands to interact directly with their customers, highlight their products and services, create shop catalogs, and more. This guide may be helpful for small to mid-sized businesses (SMBs) who are unfamiliar with the platform, but who are looking to optimize on social media eCommerce options. View the full infographic by visiting this link here.

YouTube is testing audio ads, an ad format aimed at engaging audiences via ambient listening. The option is currently in beta, and YouTube noted that this feature will help marketers to increase brand awareness through another form of advertisement. If audio ads become a permanent fixture on YouTube, this will expand the platform’s current offerings of video and visual-based ads as to audio-based ads as well, giving advertisers a wider range of creative opportunities in their marketing strategy. These ads may also be optimal for visually impaired audiences.

The platform is also working to insert ads into non-monetized content, which is reflected in YouTube’s updated Terms of Service. The Right to Monetize allows YouTube to monetize the creator’s content on the service. The agreement does not entitle the user to any payments. YouTube also states: “Starting November 18, 2020, any payments you may be entitled to receive from YouTube under any other agreement between you and YouTube (including for example payments ​under the YouTube Partner Program, Channel memberships or Super Chat) will be treated as royalties.  If required by law, Google will withhold taxes from such payments.”

For channels that are not yet part of the YouTube Partner Program, the platform is slowly rolling out ads on a limited number of videos from channels not part of the program. However, those who are not part of the program will not receive a share of revenue from these ads but will be able to apply to it if they meet eligibility requirements. For monetizing content in the U.S., the Terms of Service has been updated to note that any payments from YouTube to the creator will be considered “royalties” from the U.S. tax perspective.

That wraps up this week’s updates! Don’t forget to check in with us next Friday for more  social media news. And if you’re eager to keep up with more digital marketing news and updates, be sure to follow us on Twitter!

In the meantime, brands should stay up-to-date with how the eCommerce landscape is changing during the pandemic. Visit the link below to learn which digital marketing goals can help your business thrive during these trying times.