Welcome back, Spark Biters! This is the part where we would normally make a comment about the weather getting warmer, or deliver a clever quip about the most recent holiday, but the current circumstances are actually a lot more serious. Marvel’s Avengers: Endgame has officially been released, and the social realm is exploding.

Twitter is on top of it, announcing 40 new Marvel emojis for fans to use and enjoy, and Twitter and Instagram both have #DontSpoilTheEndgame trending. Instagram is also announcing quiz stickers for stories, and testing hiding likes on posts, Skype is introducing screen sharing for your mobile device, and Vine is back with its new version Byte!

Read on and enjoy these spoiler-free social media updates before you turn off your social feeds for the week so that you #DontSpoilTheEndgame. Avengers Assemble! 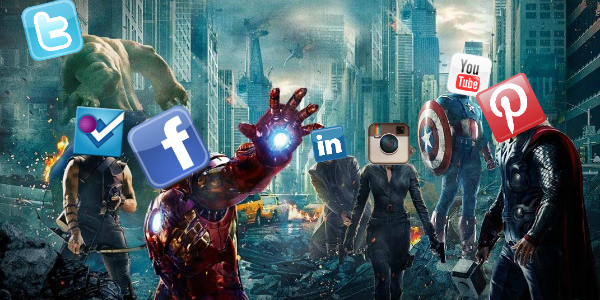 Twitter is the first Avenger on the scene today, with… lots of mini Avengers trailing behind it? Oh no, that’s right! Twitter now has 40 new emojis for users to make their tweets Marvel-ous! To use the emojis, users can write the character’s name as a hashtag, and they will be autocompleted with the respective emoji. The available characters are not limited to Endgame either. You can find your favourites from other Marvel movies as well, like our #1, the lovable Korg from Thor: Ragnarok.

Instagram is next in our crime-fighting crew. This week it introduced a quiz sticker for users to include in their stories. This is not to be confused with the question sticker, which allows viewers to type whatever answer they want, or the poll sticker, which allows viewers to vote on a subject. This sticker quizzes the viewers, and once they choose an answer from the multiple choice list, the correct answer will be revealed. Who’s ready for Jeopardy?

Instagram has a one-two punch! It is also testing a feature that will hide the number of likes on a post so that only the creator will be able to see the total number of likes that the post gets. This is intended to reduce the herd mentality of liking, so that users will like what they actually enjoy, rather than the content that just has a lot of likes already. The idea behind this is to turn the focus more towards quality content creation than vanity metrics. This will also hopefully decrease the negative impact of social media on users’ mental health. Very impressive, Instagram!

Vine-lovers rejoice! We’ve got a new Avenger joining our motley crew, and its name is Byte. Byte is the second version of Vine, with a very similar feel. It is currently in beta testing, but the platform has already become home to some very silly and very random short-form videos that we all love. Get ready to watch dearly departed Vine’s audience come running!

Skype is last, but not least, in our Avengers Initiative. In its latest update, Skype is no longer allowing you to limit your productivity just because you’re AFK. Screen sharing is now available for use on your mobile phone! You can show your friend that funny post you were looking at, or maybe that powerpoint for a project you and your team is working on. “I’m away from the computer” is not an excuse that’s going to fly anymore!

See? As promised, a medley of social media updates completely free of spoilers! I guess we have our mighty Avengers to thank for that. Now, we will be back next week for more Spark Bites, but for the time being, use social media at your own risk. #DontSpoilTheEndgame