Welcome back to another Spark Social Report by Spark Growth! This week, learn how Instagram Reels aims to take over TikTok’s space in India, how Twitter is testing its “fleets” feature, and more of the most timely social media updates!

The spread of fake news online has been a key issue not only for users but for social media platforms as well. To help mitigate this, Facebook has developed a new campaign called “Three Questions To Help Stamp Out False News.” The series of ads link to a site, www.stampoutfalsenews.com, which provides users with more information on fake news. Facebook’s campaign will first launch to a small group of users in Europe, the U.K., Turkey, and select countries in Africa and the Middle East. The company didn’t specify when its campaign would launch in other markets, but said it would be using surveys to improve the Three Questions campaign. Hot off the heels of Facebook’s new livestream ads, the company has announced more ways for content creators to monetize their work. Fan subscriptions and Stars are being made available to more creators on the platform. Click here to see which markets fan subscriptions are available in and take a look at this page to see where Stars are available. Video insights in Creator Studio have also been updated to include Stars and Live performance. In addition, Facebook also mentions it will be allowing users to create, promote, and host live events on the platform that can be monetized.

Last but not least, Facebook has updated how news stories are shown on a user’s News Feed. Publications that are more transparent and feature original reporting will have a more prominent position in the feed. Facebook judges the level of “original reporting” by looking at how often an article is cited by others as being the original content source. At this time, the company will be starting with articles written in English but hopes to expand this process to other languages in the future. Facebook will also be demoting news articles that do not have transparent authorship. In other words, if an article’s author or a publisher’s editorial staff is hidden or does not appear in the article, Facebook will flag it as being less credible.

By now, you may have heard that TikTok has been banned in India. Just days after this was announced, Instagram began testing Instagram Reels in this market. Reels is Instagram’s take on TikTok’s 15-second video format and has been tested in a variety of markets, starting with Brazil. Instagram has partnered with Saregama, an Indian music label, to allow users to use its library in their own content. While there’s no word on when Instagram Reels will be available to all users, it’ll be interesting to see whether Instagram Reels takes off in India now that TikTok is no longer available.

Remember Fleets, Twitter’s version of Stories? While it hasn’t even been released in all markets yet, it looks like the company is already making some updates to it. A new option to collaborative work on a fleet was spotted by Twitter user Matt Navarra. In the tweet shown below, fleets created by more than one user will have a double bubble featuring both user icons. At this time, fleets are only available in Brazil, India, Italy, and South Korea. Twitter says collaborative fleets are being tested in Brazil, but did not mention when other markets will get this feature or fleets in general.

For users who manage company pages on LinkedIn, you’ll now have access to new analytical tools and features. In the Analytics tab, LinkedIn has added a list of followers, allowing a user to see who is following their company page and when they first followed.

LinkedIn has also updated how many invitations a company page admin can send. Pages now have 100 “credits” or invites per month. What’s interesting to note is that if the invite is accepted, the credit is returned. This type of system encourages page admins to be more thoughtful about who they’re sending invites to, rather than simply sending out as many as is allowed.

Next, are you tired of people mispronouncing your name? LinkedIn’s got your back with its new feature that allows a user to record the pronunciation of their name. The recording limit is 10 seconds and at the moment, can only be done through the iOS/Android LinkedIn app. For users who record their name, the audio file will appear on their profile next to their name, as seen in the image below. 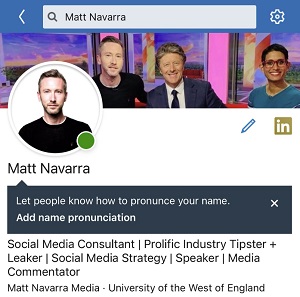 Continuing from Reddit CEO Steve Huffman’s previous announcement made in light of the #BlackLivesMatter movement, the company’s latest content policy update has been outlined in a new post. The policy features new rules that will immediately ban users and communities promoting hate speech. The updates also include expanded definitions on what counts as a violation of these rules. Since implementing the updated policy, Reddit has banned approximately 2,000 subreddits.

For iOS 14 users on LinkedIn, Reddit, and TikTok, they may have noticed their app accessing their phone’s copied text more often than needed. In iOS’s latest update, users will get notified whenever this process occurs, but many have been complaining about the excessive amount of times this happens. A spokesperson for TikTok stated that the app’s “anti-spam” feature was triggering these notifications and an updated version of the app has been uploaded to the Apple store. The company states that this feature was never released on the Android version of the app. At LinkedIn, the code that allowed the app to read a phone’s copied text has been deleted. Reddit has stated it will release a fix on July 14th.

That’s it for this week’s Spark Social Report! If you want to learn more about social media, digital marketing, and more, follow us on Twitter.

In the meantime, if you’re a business owner that has recently transitioned to eCommerce, our team of digital marketing experts can help. Click the button below to book a consultation and learn how we can help you achieve your revenue goals by reaching your target audience online.